“Katie Dahl’s songs aren’t just melodies and words, they’re journeys that are firmly grounded in a sense of place—beautiful, real landscapes that help you feel places that you may have never been before. That’s the very best kind of songwriting.”
—Dar Williams

Katie Dahl is a songwriter and playwright whose work is as expansive as Lake Michigan and as deeply rooted as its rocky coastal bluffs. A small-town celebrity on the Wisconsin peninsula where her family has lived for 175 years, she is now a radio-charting folk artist who tours around the world. Clear-eyed and tough-minded, fresh and funny, Katie “delivers razor-sharp lyrics with a hearty, soulful voice” (American Songwriter).

Katie’s four albums of original songs showcase her creamy alto and trademark wit, as well as her unflinching authenticity. Her recent work finds her exploring more vulnerable territory than ever before, from anxiety to body image to the challenges of growing up queer in an evangelical church. Richly steeped in the American songwriting tradition, Katie navigates the muddy waters between the personal, public, and political with tenderness and dexterity.

Katie is currently working with renowned producer Julie Wolf on a new album slated for release in early 2023. Her previous album, Wildwood, was produced by JT Nero (Birds of Chicago) and features Allison Russell; that record’s “Worry My Friend” hit #6 on the folk radio charts in 2019. Her song “Crowns” spent a month at #1 on the charts in 2015.

Katie is also a playwright; her latest musical The Fisherman’s Daughters (2021) tells the story of two sisters in 1908 who fight the state of Wisconsin’s efforts to take their rural homestead via eminent domain to make a state park. Victory Farm (2012; co-written with James Valcq and Emilie Coulson) is a fictionalized account of the real-life German POWs who came to Wisconsin to pick cherries during World War II. Both plays were made into live cast recordings.

Katie was a college freshman in Minnesota when she slipped on a patch of sidewalk ice and broke her wrist. Suddenly unable to play the oboe in her college orchestra, Katie used her newfound free time to learn guitar, teaching herself chord shapes as she strummed the strings with her stiff right hand. Nine years later, that icy day has proven to be a blessing in disguise, leading Katie into a life of work that Dar Williams calls “the very best kind of songwriting.” 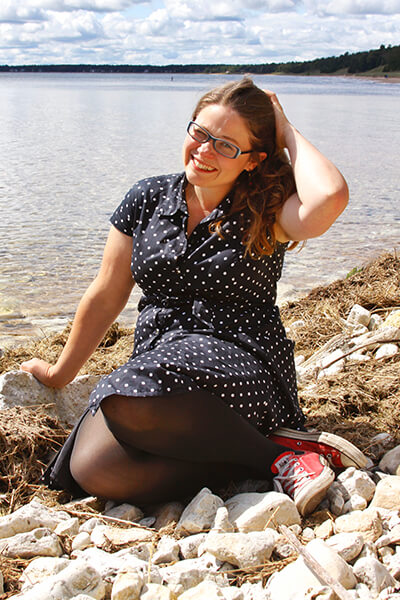